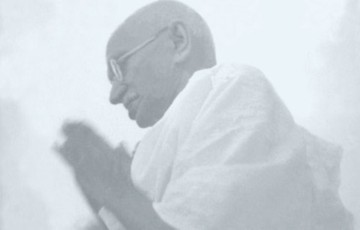 Today, 30th January, is the anniversary of the death of Gandhi. 59 years ago, he was assassinated as he made his way to evening prayers. Ironically it was a Hindu man who shot him.

Gandhi is up there with all the great people who graced the 20th century. Yet it is a mystery how he never actually got the Nobel peace prize.

Dr Martin Luther King who applied Gandhi’s teaching of non-violence in the USA was awarded the prize in 1964.

Gandhi was indeed routinely nominated for the award many times. He certainly deserved it, as his teachings of non-violence helped free India from British rule and also inspired the likes of Dr King and others.

He was again nominated in 1948, but sadly he was assassinated just a few days before the closing of the noinations for that year. That year he was the odds on favourite having finally freed India a few month before in August 1947.

As the Nobel Prize is never awarded posthumously, the selection committee that year chose not to award the peace prize to anyone.

They declared that there was “no suitable living candidate.” I guess Gandhi would have been a hard act to follow.

We can be certain that Gandhi would not been perturbed in the slightest for never having been recognised in this way. The true legacy of his messages lives on and that would have been more important to him than any award.

As we mark Gandhi’s death anniversary, reflect on bringing more peace not only on the global stage, but also in your own world.

What can you do today to bring more peace into your world?

Remember, peace in the world begins with peace in your world. As Gandhi said,

Every worthwhile accomplishment, big or little, has its stages of drudgery and triumph; a beginning, a struggle and a victory.

Can you imagine how the world would be today if he was alive to propagate his message to the world?

Check out the excellent YouTube video below to see how he may have used modern technology to spread his message:-