The Light the World needs Today 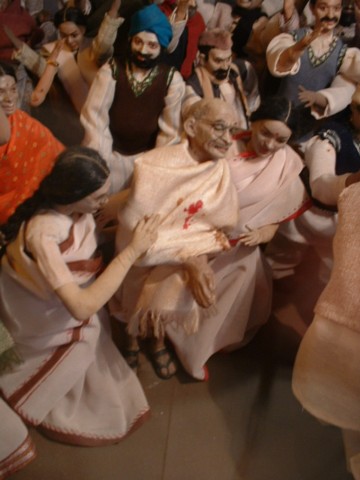 As the world dangerously moves to a catastrophic war against Iran, I am reminded of the play about Gandhi’s life and his key messages about peace.

At the end of the play, after Gandhi’s assasination, India’s prime minster, Jawaharlal Nehru went on the air and broadcast some famous words about the light having gone out of our lives.

“Friends and comrades, the light has gone out of our lives and there is darkness everywhere. I do not know what to tell you and how to say it. Our beloved leader, Bapu as we called him, the Father of the Nation, is no more. Perhaps I am wrong to say that. Nevertheless, we will not see him again as we have seen him for these many years. We will not run to him for advice and seek solace from him, and that is a terrible blow, not to me only but to millions and millions in this country. And it is a little difficult to soften the blow by any other advice that I or anyone else can give you.

The light has gone out, I said, and yet I was wrong. For the light that shone in this country was no ordinary light. The light that has illumined this country for these many years will illumine this country for many more years later, that light will still be seen in this country and the world will see it and it will give solace to innumerable hearts. For that light represented something more than the immediate present; it represented the living, the eternal truths, reminding us of the right path, drawing us from error, taking this ancient country to freedom.

All this has happened when there was so much more for him to do. We could never think that he was unnecessary or that he had done his task. But now, particularly, when we are faced with so many difficulties, his not being with us is a blow most terrible to bear.

A madman has put an end to his life, for I can only call him mad who did it and yet there has been enough of poison spread in this country during the past years and months, and this poison has had an effect on people’s minds. We must face this poison, we must root out this poison, and we must face all the perils that encompass us, and face them not madly or badly, but rather in the way that our beloved teacher taught us to face them.

The first thing I remember now is that none of us dare misbehave because he is angry. We have to behave like strong and determined people, determined to face all the perils that surround us, determined to carry out the mandate that our great teacher and our great leader has given us, remembering always that if, as I believe, his spirit looks upon us and sees us, nothing would displease his soul so much as to see that we have indulged in any small behaviour or any violence.

So we must not do that. But that does not mean that we should be weak, but rather that we should, in strength and in unity, face all the troubles that are in front of us. We must hold together, and all our petty troubles and difficulties and conflicts must be ended in the face of this great disaster. A great disaster is a symbol to us to remember all the big things of life and forget the small things of which we have thought too much. In his death he has reminded us of the big things of life, the living truth, and if we remember that, then it will be well with India.