What Goes Around Comes Around! 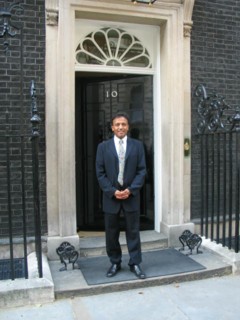 Talking of Anne Frank and her message of all people having goodness in them, three years ago I was lucky enough to be invited to Downing Street for the re-launch of the Anne Frank charity in the UK. Though this charity is not that well known, it does some amazing and life changing work in schools, spreading the key messages from Anne Frank.

It was a wonderful evening at 11, Downing Street (not at number 10!). There were some inspirational speechs and I met quite a few amazing people. There was a lot of talk abut contribution, giving, making a difference and leaving the world a better place. Anne Frank would have been impressed 🙂

Later that evening, I learnt yet again the power of giving and getting much more back.

As the evening ended, we all walked out of number 11. Being a June evening, it was still quite sunny outside, and as we walked past number 10, I decided to have some photos taken of me posing outside what is probably one of the most famous front doors in the world. Surprisingly, at that time, there was no policeman outside the door as is always is the case when you see 10, Downing St on television.

As usual I had my digital camera with me, amd you can see the resulting photo above.

However, as I was posing I saw all these other attendees looking around with what must have been envy. It turned out none of them had brought a camera.

So I did the right thing and offered to take pictures of everyone one by one. I snapped away and collected everyone’s business cards with a description of what they were wearing such as grey tie, blue shirt etc so I could indentify the photos. I took photos of four different people in all.

That very evening, I emailed everyone the images and thought nothing more of it. The very next day I received very gracious and appreciative emails from people, strangers previously but now my new friends.

However, the story does not end there. Over the course of the following 18 months, this is what happened as a result of having taken photos of four of the many new friends in my life:-

1. One friend became my speaking coach and mentor and has been instrumental in getting me started on my public speaking career. He has now also become a great friend.

2. Second friend introduced me to her best friend who helped me with the PR for the launch of my second book.

3. Six months later, a third friend recommended me to someone else who became a coaching client and now a good friend.

4. And the fourth friend? He heard me speak when I presented my first ever showcase keynote talk to a group of 20 professional speakers. Whilst I was pilloried by all the other speakers, which was the idea anyway as I wanted to improve, this gentleman pulled me over to one side at the end of the evening and said something which meant a lot to me and gave me more encouragement and inspiration than anyone else that evening. He simply said that as I spoke from the heart, I had everything I needed to move and inspire an audience, the rest was now just a matter of practice.

So there we are. It is amazing how much I got back simply through using my camera to capture a special moment in the life of these four people.

You just never know how a good turn today can pay back manifold in the future. So from today, be open and willing to help out others, no matter how small.

Give and you will indeed receive so much more.