Change the World Through the Young People of Today 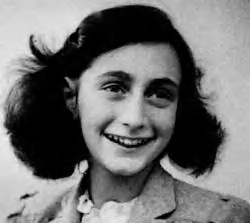 Anne Frank’s Diary was published on 25th June 1947 and has inspired generations of children ever since.

Nearly 40 million copies of Anne’ diary have been published in nearly 70 years. Burmese to Bengali and Belarussion, Kazak to Khmer and Korean, just imagine all these children sitting behind a diverse-range of book covers, being captivated by her words.

Later today, on Anne Frank’s 78th birthday, I will be attending an event to celebrate her life and her words. To mark this day, many other children will be honoured for their own unique achievements.

In the meantime, join me and also help spread her message by learning and living by the Anne Frank Declaration:-

I will stand up for what is right and speak out against what is unfair and wrong
I will try to defend those who cannot defend themselves
I will strive for a world in which our differences will make no difference – a world in which everyone is treated fairly and has an equal chance in life.
The Anne Frank Declaration is an inspiration to us all to work together for a better world free from prejudice and hatred.

Start today to live her message in your daily life.