No More Clothes Smelling of Smoke! 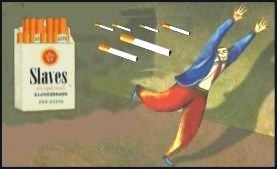 The new law to ban smoking from public places finally comes into place from tomorrow in England.

A whole new era begins of cleaner bars, clubs and restaurants. It will be wonderful to go out socialising and not have to worry about inhaling secondary smoke and going home with smelly clothes.

It is also a welcome boost for all the staff who have to work in such institutions and have had to put up with secondary smoke as one of the hazards of their workplace.

I can see no downside to the ban apart from smokers having to congregate outside and many venues having to provide special smoking areas. Though many smokers have complained about the unfairness of the ban, we have to consider the greater good. Many smokers may even be prompted to give up as a result of the new regulation. It is estimated that around over half a million smokers will kick the habit over the coming months.

Incredibly it is only 20 years ago that smoking was even allowed on the London underground, but the Kings Cross fire in 1987 put a stop to that.

One day we will probably all wonder why we didn’t bring in the smoking in public places ban much earlier.

At least we can thank Tony Blair for that 🙂