Get over It, Girl! 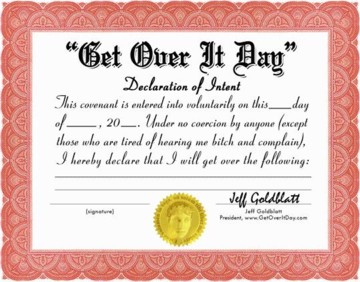 I recently wrote about how it was time to let your light shine.

During that talk by Marianne Williamson in central London, she spoke with a lot of humour and compassion about supporting the people around us.

Supporting the people in our lives is all about empowering them, helping them to connect with their highest self and encouraging them to be the best they can.

However so often, we actually end up inadvertently keeping people in their current state of negativity.

Do you allow the people in your life to dump on you?!

Indeed do YOU dump on the people in your life?

It is all about creating boundaries and not letting people get carried away with their wallowing. Of course, as a friend you show empathy, sympathy and compassion as appropriate. But there comes a time when it is no longer empowering to allow a friend to continually feed you with their sob story.

Marianne Williamson related how she dealt with such a friend. She first acknowledged the pain and sorrow that her friend was going through and said how she really felt for her. But then in the most gentlest, kindest but firm way, Marianne added – “But get over it, girl!”

That was just what her friend needed to hear at that time to finally stop wallowing and literally get over it.

A few days after the Marianne Williamson talk, I found myself having dinner with a friend whose relationship had ended a few weeks previously. For about 20 minutes, I patiently listened to her monologue about her broken heart, her sadness and her pain.

I then had a choice to let this continue for the rest of the evening or to put a gentle stop to it. So I put into practice Marianne’s suggestion and hey presto, it worked.

My friend got the message and her physiology almost changed as she finally realised how she had been wallowing in it and dumping on others. She certainly begun her journey of getting it over there and then.

So next time, you feel the negativity of another person stuck in their past, encourage them to get over it. Of course do so in the nicest possible way. They will probably thank you one day for doing so.

And in your own life, what do YOU need to get over right now?!