Peace March for Burma – Every Voice and Every Step Counts 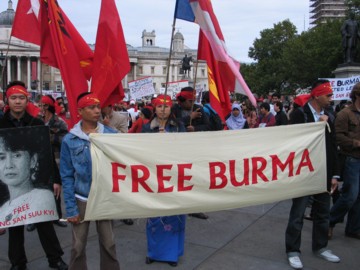 A couple of days I go I wrote how it was time to support the people of monks and people of Burma.

Well, today I was able to put my words into action as I marched through central London along with around an estimated crowd of 3,000 people.

Amazingly, we had excellent summery sunshine and it was a most peaceful and uplifting day. From the moment we set off from Trafalgar Square to the time we arrived at Battersea for a pratyer ceremony at the peace pagoda, it felt we were all part of something special, worthwhile and historic.

By voicing our support for the people and monks of Burma, we have made a statement that justice and freedom will ultimately prevail.

The pictures below are testimony to a wonderful day of protest, yet carried out in good spirits and peace. As one of the monks said at the prayer ceremony – conflict only ends when one side does not fight back. The monks and the ordinary people of Burma have refused to counter attack and this non-violence approach as advocated by Mahatma Gandhi and Dr Martin Luther King will ultimately prevail.

Let us hope that there are no more casualties over the coming days. In the meantime, the people of Burma can rest assured that people in London and all over the world are behind them.

In the meantime, you can get a flavour of the day through these pictures:- 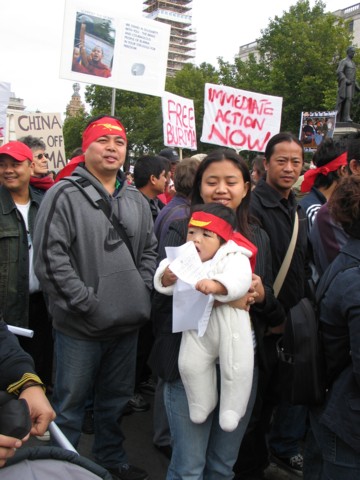 Burmese and other monks walking in Battersea Park, a picture of calm, serenity and innocence:- 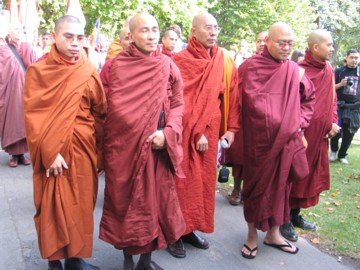 Monks preparing for the prayer ceremony at the Peace Pagoda in Battersea Park, London:- 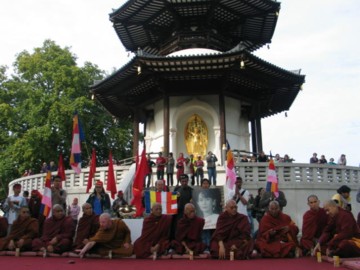