It is very rare that you meet a person touched by greatness.

Yesterday evening, I was lucky to be at a talk given by such a person. Even better, somehow I had a front row seat, so a friend and I were just a couple of meters from the stage.

If you have not yet heard of Lewis Gordon Pugh (where have you been?!), then make a note of that name – you are going to hear a lot more of him over the coming months and years.

In fact, judging by his astonishing track record of success and achievement, Lewis Gordon Pugh could single-handedly save the polar regions of the world from extinction and rancid development.

For ease of reference, I shall refer to Lewis Gordon Pugh as Lewis for the rest of this article. I am sure he will not mind – I also found him to be endearingly humble, very approachable and friendly.

Yesterday, I attended the monthly YES group event in London where Lewis was the key-note speaker. I have listened to many world class speakers in the past and been in the presence of some of the world’s highest achievers, but Lewis yesterday was the best of the lot that I have been lucky enough to be in the presence of.

It is not easy to sum up who Lewis is and to get across the true scale of his incredible achievements. But I will try and do him justice.

As an environmental campaigner, a British lawyer and an endurance swimmer, 37-year old Lewis Gordon Pugh, wanted to highlight the impact of climate change in the high Arctic. So on July 15 2007, he jumped into freezing waters at the Geographic North Pole and swam one kilometer in 18 minutes and 50 seconds.

The temperature of 28.7F (-1.8C) reportedly is the coldest water that a human has managed to swim in and survive. Pugh has earned the name “Polar Bear” because of his ability to raise his body temperature.

Lewis said that it is a tragedy that global warming even enabled him to swim at the Geographic North Pole in the first place. He swam in what was essentially an ice crack, a patch of open sea at the top of the world. Such open water is becoming more common during the summer months.

Many scientists believe that by 2040, the Arctic could be entirely ice-free during summer. According to the World Wildlife Fund, Arctic air temperatures may rise as much as 12 degrees C in the next 100 years.

Last night, Lewis’s talk was based around his amazing feat of swimming that 1km in temperatures below 0 degree centigrade and surviving.

The title of his talk was “Achieving the Impossible.” 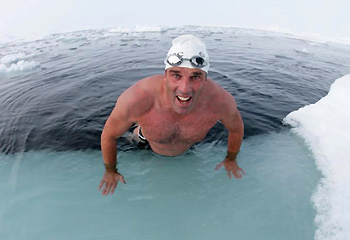 I picked up a numerous tips and learnings that we can all apply in our lives from today to make things happen. I shall therefore be presenting my learnings in 5 separate articles over the next 2 days.

Soon after his famous feat of swimming in the arctic, Lewis had said: “I hope my swim will inspire world leaders to take climate change seriously. The decisions which they make over the next few years will determine the biodiversity of our world. I want my children, and their children, to know that polar bears are still living in the Arctic – these creatures are on the front line up here.”

“I am obviously ecstatic to have succeeded but this swim is a triumph and a tragedy – a triumph that I could swim in such ferocious conditions but a tragedy that it’s possible to swim at the North Pole.”

Why was Lewis’s feat deemed impossible?!

Doctors had said that swimming 1km in the geographic North Pole was impossible and that it would kill him.

There was only one doctor in the world who didn’t think that the swim would kill Lewis – and that was the doctor in his team!

So what inspired Lewis?

Well, from a young age of 6 years, he used to be enthralled by stories of explorers told by his father. From that age onwards he know that his destiny was to be one day in the polar region. He dreamed that one day he would get there.

The rest is history – he has gone on to today become a record breaking swimmer, environmentalist and a champion for the Polar Regions.

However, he didn’t even have his first swimming lesson till he was 17. Talk about being a late developer!

Lewis explained that his first mentors were his parents and how his father instilled in him this sense of wonder and adventure.

He also suggested that you should also look for inspiration outside your field. The winning formula that other people have such as sportsmen can also be applied in your life too. Be open and willing to learn from others.

Since that first swimming lesson over the ensuing 20 years, Lewis has seen dramatic climatic changes in the Arctic. When he did his 1 Km swim in July 2007 it was mainly to bring the world’s attention to the effects of global warming on the Arctic.

In the next part of this series about Lewis Gordon Pugh, I will explain just how he did it and how he got his dream team together.

In the meantime, what key lessons can you take from this article? 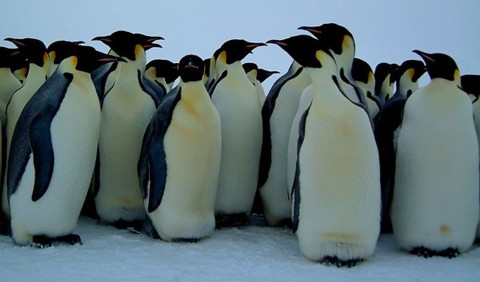