Meet My Hero Muhammad Yunus – Creating a World Without Poverty 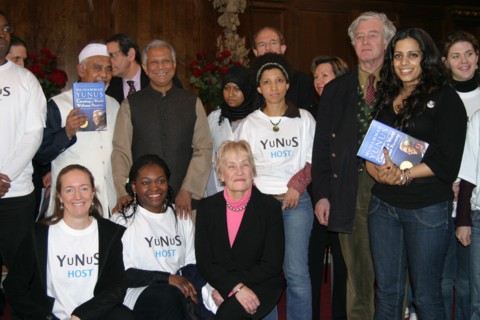 Last Saturday I was lucky enough to hear live a lecture by Professor Muhammad Yunus at the wonderful St James Church in Piccadilly London. Professor Yunus was honoured and recognised for this life changing work amongst the poor of Bangladesh with the Nobel Peace Prize in 2006.

I was especially lucky to have had front row seats – and you can see more pictures on my Facebook profile.

It was quite an inspirational day – here was an amazing man with the lofty ambition of eliminating poverty from the world and to one day make it simply non existent – so that we would need “Poverty Museums” to show future generations what life used to be like for the majority of people on earth. They will wonder why poverty existed so long in humankind – and how there could have been so much inequality in the world.

That really is a question that bugs me too so often – why is there so much poverty and inequality in the world. And more importantly what we can do about it?

Well, Professor Yunus is on a mission to create a world without poverty. He launched the Grameen Bank over 20 years ago and literally rescued millions of families from poverty. He created the concept of micro-credit which is now similarly being applied in over 100 countries world-wide.

Below I present some of the key points from Professor Yunus’s talk which he started with a lovely quotation:-

“We are all captains in the Armada of Love”

The challenge of tackling poverty

The challenge for mankind is how can we create a just / safer / healthier place for the next generation? However we can easily get overwhelmed when we realise just how much needs to be done.

Poverty is the denial of all human rights and the greatest injustice in the world today and the solution is to do something, anything and not be overwhelmed. Help one person at a time, even if only for one day.

There is a simple cure to global warming and also world poverty if only we were all willing to embrace it – a lifestyle shift.

Professor Yunus outlined how he first started Grameen bank after learning how the lives of 42 people and their families were at the behest of moneylenders who were owed just $27 in total. These families were suffering so much for relatively very little money. He paid off their debts and created what he calls $27 dollar miracle.

In his words, he learnt how to become an angel for just $27!

With a 99% repayment rate, almost all the loans were always fully repaid by the poorest of the poor. 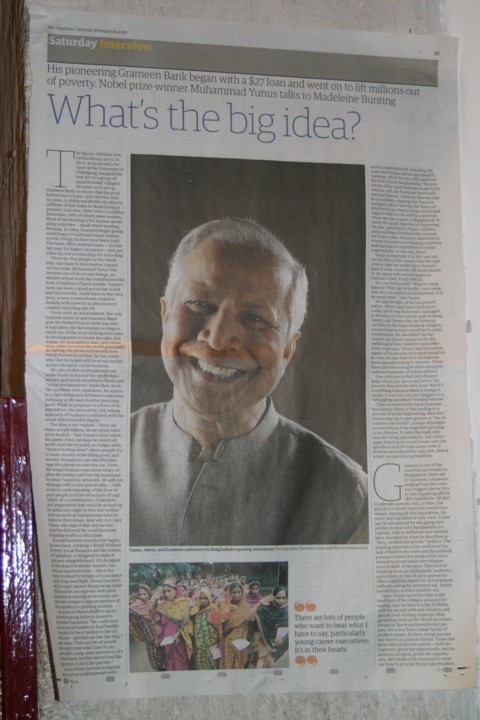 He then asked the question – why not do this on a wider scale. After many years of challenges, he finally succeeded in creating Grameen Bank, which means Village Bank.

The rest is history, with Grameen Bank today giving loans to around 7.5 million poor people, 97 percent being women, in 73,000 villages around Bangladesh.

He focused on lending to women as this was found to bring most benefits to the families.

Whereas for western investment banks, the customer profile is normally a rich man with lots of credit information, the typical Grameen Bank customer is a woman, very poor, illiterate, and with no background information.

Professor Yunus recounted some stories of how through the work of Grameen Bank, illiterate mothers now have a daughter who is a medical doctor or a son who is an engineer.

The bank has given out over 21,000 education loans for students now studying medicine and engineering whereas before they had little or no hope for any higher education.

Poor people are NOT stupid people

What he stressed was that there is NOTHING wrong with these poor people – they just want to be given a fair and equal chance at succeeding.

So called poor people are capable of far more than we ever give them credit for. Professor Yunus highlighted his point by outlining another Grameen initiative –cellphone loans to women so that each village now has a “telephone lady”. Initially, this led to resistance amongst the telecommunications companies as the women were perceived to be illiterate and incapable of using cellphones.

As professor Yunus emphasised again, the women may be illiterate, but they were NOT stupid. Soon these women had established thriving businesses providing telephone services in remote villages and connecting them with the rest of the world.

At a meeting to review their progress, one telephone lady challenged Professor Yunus to blindfold her and then ask her to dial his cellphone number! If she got it wrong, he could simply take away her cellphone (and her business).

So who created poverty?

In simple terms, the system, the institutions and concepts we have developed over decades and centuries. As he said, it is so easy to undermine the capability of others without knowing them – and this is the cause of poverty!

Professor Yunus presented his concept of social businesses and how in order to do good things, we have to think beyond ourselves

There are two types of businesses:-

Whereas the “philanthropy dollar” can only be used once, the “social dollar” can be used again and again.

If anyone can get rid of poverty from the world, it is professor Yunus. As he said, one day we will have poverty museums and I believe he mentioned by the year 2030.

What will YOU do to help the world rid of poverty? 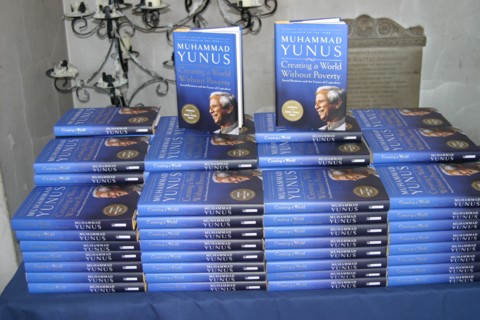