World AIDs Day – An Invitation to do Your Bit 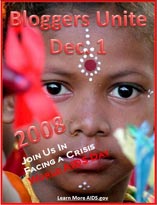 Every now and then bloggers around the world unite to blog about a pressing issue of our day. And AIDs is just as big a challenge that we face today as global warming, poverty and war.

Some of the statistics about the scale of aids are just staggering:-

So it really is time for us all to wake up to the scale of the problem.

Here are some useful links to check out to learn about Aids / HIV and of course how to take greater care:-

2. Learn about the link between drugs and aids.

3. Video series to show how even non-injection drugs can lead to HIV.

There is so much ignorance about Aids and I really hope the awareness day today helps spread the word extensively. It is about educating others and supporting those who already have contracted it.

Coincidentally, last Thursday I met this amazing lady Getrude Matshe, originally from Zimbabwe who is working relentlessly hard to help the aids affected children in Africa.

As for what you can do, just be aware of the dangers of contracting AIDs and also show great understanding and acceptance of anyone who is HIV positive.

What else will you do?