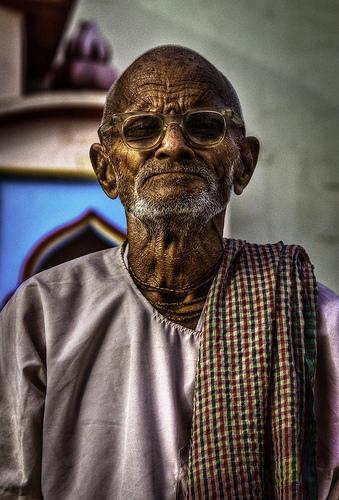 Isn’t it amazing what life experiences you can have if you are open to it!

Today I wish to share a funny and poignant story of how an 87-year-old man “gatecrashed” a family wedding last weekend.

I say “gatecrashed” but as you will read below, he was actually “invited” by me.

Before I continue my story and the lessons in life for us, I wish to thank you and all the many other loyal readers who have been following me for a while.

I appreciate that you want more human stories and simple lessons in life, so from now onwards I will be writing once or twice a week and sharing more of my personal anecdotes.

Please also let me know – what else would you like from me?

Back to my story then – I was attending this family wedding just outside of London and couldn’t find any parking. Eventually, I parked in this quaint housing estate but wasn’t sure if it was okay to park there.

An old man was passing by and I asked him if it was okay to do so. He confirmed and then also wished me fun and enjoyment wherever I was going. I explained that I was off to a wedding in the hall nearby and he said how he had never been to an Indian wedding.

I half-jokingly invited him and said he should come along as everyone was welcome!

I never thought he would come – as I found out later on,  he was 87 years old. He wore glasses, had hearing aids in both ears and was using a walking stick. He thanked me profusely for the invitation and then went off towards his home.

So imagine my surprise when about twenty minutes later he appeared at the wedding. Before I had a chance to talk to him, he was whisked off to the front row of chairs and given a prime seat as the wedding proceeded on the stage in front of him.

Halfway through the wedding he was introduced to the bride and met most of the family. He was made the chief guest of honour!

You have to remember that Indian weddings are big and brash affairs with a lot of colour, music, food and joviality. And here amongst the 400 plus guests, an 87-year-old man was having the time of his life!

Nothing on this earth compares to an Indian wedding. Drama, action and comedy all rolled into one with liberal sprinklings of love and laughter.

Everyone should experience an Indian wedding fun and frolics, and Indian hospitality at least once in their lives.

I thought it was very funny indeed when he turned up. If my “jokes” have such positive outcomes then I surely must joke around even more in the future. At the same time, I was worried about having “invited” him, but it was completely fine with all the other guests:-)

He stayed until the end of the wedding and watched the bride and groom leave. I wonder what he made of all the tears and crying – Indian weddings often end with tears as the bride is now seen to be leaving her parent’s home and starting a new life elsewhere.

I spoke to him later on and we had dinner together, though he found the food a bit too spicy. He said the wedding was like going to a West End (or Broadway depending on where you are) musical!

He was so chuffed and moved to be welcomed so openly. At such times, I am so proud to be of Indian heritage and of our cultural openness & warmth. Makes me really glad to be human:-)

It is also about respecting our elders – and treating all guests like kings.

Many other cultures also share similar traits about openness and hospitality, but clearly, I am most familiar with my Indian heritage. (Do share about your own culture below).

So what are the lessons we can learn from this funny story?

Firstly, when I shared my experience on Facebook, within a short time I had over 26 “comments” and “likes” to this story. This shows that people liked the funny side of this and even more importantly, they like human stories.

Secondly, it is about respect and openness towards others. People are open to new things and other cultures and experiences – we just have to give them a chance to experience it all for themselves.

Most importantly, the lesson I would like you to take away is that it takes very little to make someone’s day and to show kindness to others.

Ultimately, we are all one, and every little thing that you do brings us closer and makes a difference in the big scheme of things.

Go forth and find your own simple ways of making this world a better place.

By the way, this 87-year-old young man’s name was “Sid Nathan” – and you would have never believed it looking at him, but he was an ex-professional boxing referee!

In the ’70s and ’80s, he refereed world championships fights featuring the likes of John Conteh, Joe Bugner and Nigel Benn. He proudly said to check out his fight record on the internet.

And though I don’t agree with boxing, you can even see a young Sid Nathan in action.

Mr Nathan asked me what I did and when I explained and gave him my card, he said he would get his daughter to check out my blog. He explained that he was not internet savvy yet, but she was an expert. She was aged only 64!

There we are – there is a whippersnapper of a 64-year-old out there somewhere reading this blog post right now:-)

Now, please share below your own stories about how a simple and kind gesture resulted in an awesome experience for you and others

Also, what’s special and unique about your own culture. Please do share…