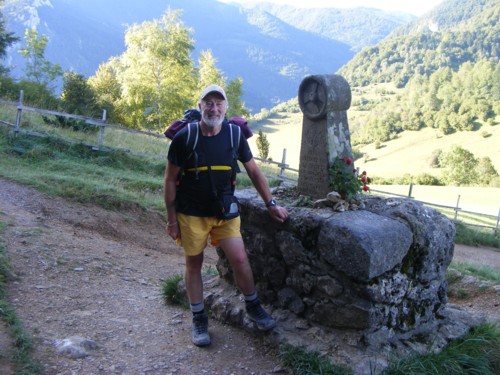 Have you ever met someone who instantly inspires you with their way of being?

I met someone just like that a few weeks ago on what was actually a very sad occasion. A long time friend’s wife lost her brave fight against illness and passed away at a young age.

The memorial service was beautifully run by John Merrill. I really liked what it said on his card – “Embracing and Honouring all Faiths”

What truly touched me was John’s deep compassion, humanity and genuine interest in people. He shared a lot of stories and has clearly led a very interesting and fulfilling life.

I asked John to share a story with us and this is what he sent me:-

“I want to tell you a true story.

A Leo boy was born in London, the result of a one night stand during World War Two. The father never saw his son and after just nine months, his mother was forced to give him up for adoption – she never saw him again.

The boy was adopted by a middle aged couple in Sheffield who did their utmost to bring him up as their son. He proved a troublesome and rebellious child, eventually spending ten years in boarding schools in North Yorkshire.

No, he was enjoying life to the full and everything that happened to him was all part of a divine plan and purpose, but he didn’t appreciate this until much later in life.

When only 6 years old, one afternoon his whole class was taken into the Peak District, to a gritstone edge. He had never been out in the countryside before, but the visit made a huge impact on him.

That sense of fresh air, freedom, rocks to scramble up, the views, the birds singing away and the wild flowers waving in the light breeze, all created a scene of paradise.

He knew instantly what his life would be.

The following term he was expelled – it’s not known why. Finally his adopted father found a boarding school in North Yorkshire, where he spent ten happy years, although always bottom of the class.

He created new records for being canned and new athletic records on the sports field!

By the time he was fifteen he was climbing up the school building and camping outside during the summer term.

His Quaker headmaster caught him one day climbing up the four storey hall and summoned him to his office – now!

Fearing expulsion, as he already been sent home 3 weeks early the previous term, he stood before the headmaster’s desk, only to be told to sit in the chair beside him.

The headmaster didn’t admonish him, but simply said he had better be properly trained!

A month later he was on a month’s Outward Bound Mountain course in the Lake District. His adopted father put his name forward for an expedition to Norway. He was accepted and enjoyed a month of climbing there.

“There are many paths up a mountain, but only one summit.” – John Merrill

Exams (O’ Levels) came and he took eight and failed them all; his highest mark was 14% in English!

His adopted father was horrified and he stayed on another year and swotted like mad; only to fail them all again!

However, he did take a ninth subject, Pottery, and made a figure of a climber on the top of Everest. It was marked 45% the lowest pass mark and he had finally gained one O’ Level subject.

After finishing school, he worked in factories in Sheffield and after eight years was a Works Manager. However, three nights a week and every weekend he was out walking and climbing; he knew this was where he should be, but how could he make a living from it?

He decided to walk around the Island of Mull, about 200 miles, and take photographs for a talk and write articles for magazines. He had never done of these things before.

As he walked down the Ross of Mull, he came to the Sound between the Isle of Iona. Already synchronicity was at work!

For as he walked onto the beach a boat from the island rowed ashore. The boatman asked if he wanted to go the island. He jumped aboard, the only passenger and camped beside the Abbey in the rain.

Visiting the Abbey he noticed there was a service at 6 pm and thought no more about it. At 5.55 pm. a voice in him told him to go to that service. He went wondering why, sang the hymns and listened to the readings, prayers and then the sermon.

He sat bolt upright as the message was –

“God gives you the chance to do what you should be doing. If you don’t take it he will give you again”.

He immediately realised he had the chance to follow his infant dream.

Back home, he was soon receiving lecture bookings and his articles on the island walk were accepted and published!

He wrote a book on “Walking in Derbyshire”, and sent it a publisher and was accepted. The book sold 150,000 copies.

Whilst on Mull, he dreamt of walking through all the Hebridean Islands on one long walk. Again he had never done a marathon walk before.

Six months later he set off and linked all the islands together of the Inner and Outer Hebrides, walking 1,004 miles in 54 days. It rained once and he saw no other walkers, just an amazing abundance of wildlife.

Over the following years, he took no advice from anyone, just following his heart and his love for the countryside.

“I cannot be defined, No label sticks to me, No pigeon hole do I fit. I am connected to everything, I am part of the whole. A part has no meaning on its own.”  – John Merrill

He continued to lecture and write, with more than 370 books so far. Then six years ago he received a letter; a complete shock. Derby University wanted to honour him with a Masters Degree at their annual awards ceremony, for his walking and writing!

The day was momentous and in his speech he said that his one regret that day was that his adopted parents and three headmasters were not there to see what had become of their naughty boy!

Through his walking in nature and wilderness, he always knew inside that he was cared for, protected, and watched over.

He has never broken a bone, got lost, been ill or had any trouble. He is deeply spiritual but never spoke about it or the real wonders he had seen and experienced.

Then, as he approached his 65th birthday a voice in him said that it was time for him to release and speak about his life and spirituality. Two days later the next issue of Kindred Spirit arrived. It had a competition and for the first time he wrote about his life’s journey. He won a book!

The next issue had an advert for the Interfaith Foundation – to train to be a Minister. The words Inter Faith rang a bell in his head.

Two months later he was training to be a Minister. Today he is ordained and speaking openly about his life.

And who is this person? Me!

The message of this story is simple – follow your heart.

Don’t listen to anyone, simply do your own thing, what you love doing.

All will unfold as you follow this path. Obstacles will disappear, opportunities will come in abundance and money will always be there when needed. Simply trust and have absolute faith and go with the flow of it.”

So there you – thanks very much John for sharing your inspirational story.

Help to Spread the Word