How to be Outrageous and Change your Life For Ever! 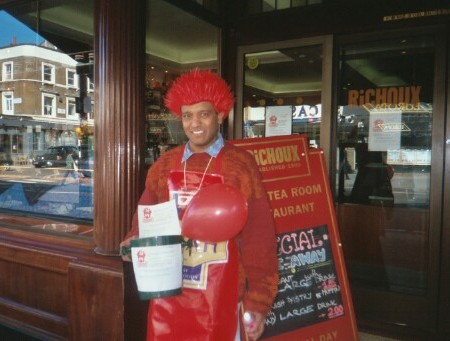 When was the last time you were truly outrageous!?

Indeed when was the last time you really let your hair down and you had some fun?

Next time you are on a train or a bus, just look at the people around you. I bet you will see some really serious faces, especially if you are in London travelling at peak time.

Everyone seems to be on some important mission to get somewhere fast – and they are oblivious to all that’s going on around them.

At one time, I too was like that – Mr Determined (and also Mr Angry) full of self-importance living in my little self-deluded world, full of lofty dreams.

Strange, as I wrote the last sentence, the lyrics from the Beatles haunting song “Nowhere Man” just came to my mind. Nowhere man indeed. Perhaps the opening verses apply to all of us in some way:-

He’s a real nowhere man,
Sitting in his Nowhere Land,
Making all his nowhere plans
for nobody.

Doesn’t have a point of view,
Knows not where he’s going to,
Isn’t he a bit like you and me?

I often wonder where everyone is going with such serious faces?

And why do people take life so seriously!?

Today is Red Nose Day in the UK – this is a 2 yearly event where we all get an excuse to be silly and let our hair down – all for a good cause.

It’s a day to be zany and to do fun things – the sillier you are, the more money you can raise – and bring a smile to the faces of those around you and also children in far off lands who will ultimately benefit.

I always do wonder why we can’t continue with this sense of generosity, giving and fun for the rest of the year. It’s just like what happens after Xmas time – as soon as the festive tinsel comes down, the spirit of goodness also seems to just vanish.

Red Nose day always inspires me with just how open and willing people are to help others and make a contribution – and also willing to be vulnerable and show their soft, caring side.

I believe that ultimately we all WANT to make a difference and help others. And we will never be truly happy until we have found that one thing which we are meant to do.

Yes, along the way we must also fully support ourselves and have an abundant, full and fun life – but ultimately we want to make a contribution and to know that we count and we made a difference.

There are umpteen good causes and projects you can choose from – you just have to choose to make a difference, and the rest is easy.

It’s important to enjoy the journey and have a FUN life – otherwise what’s the point!?

It can be a life-changing experience – just as it was for me exactly 10 years again when in March 2003, I dressed up with a red wig at my local café called Richoux in order to raise money for Red Nose and Comic Relief.

This was probably the first times in my life that I really let my hair down (under the red wig!) and it was an outrageous day of fun and interacting with so many people – most of them bemused by this short, brown man in a red wig waving a collection bucket in their face.

I am sure most of them put some coins in the bucket just to make me go away!

This is a classic example of how you can get so much back by offering something to others.

Let me tell you what happened – and how that one day of being outrageous changed my life forever:-

1. My plan was that I would spend a whole day at my favourite coffee shop wearing a red wig and I would give people a short coaching session in return for some donations.

2. To promote my fundraising, I sent a press release to my local newspaper and a journalist came to my office to interview me and for a complimentary coaching session.

3. The journalist had never even heard of coaching and he was so pleased with his session, he sent a photographer around the same afternoon to take some shots of me. I dashed to my local fancy dress shop and bought a red wig for the photographs.

As a result, I was featured in his paper for two weeks running wearing a silly red wig, and I raised £800 for Red Nose and Comic.

4. A week later I called the journalist to thank him for his coverage and offered to write a coaching column in his paper.

5. I then wrote a regular column in my local paper for the following 9 months, in a prime position on the same page as the editor’s comments and letters from readers. I got a lot of exposure as a result!

6. Six months after the Red Nose day, I realised I had enough material for a book. So in just five weeks in time for Christmas 2003, I put together and self-published my first book – “Get a Life”. I went on to sell almost the entire print run of 2,000 copies in less than 18 months.

This may not sound like much, but this was exceptionally good for a self-published book – and this was in the days before self-publishing became so common and easy.

7. My story of the positive outcomes from that Red Nose Day still doesn’t end there. In late 2005, based on the learnings from my first book, I wrote my second book – “Get the Life you Love and Live it”. This was a revamped version of my first book and to date, I have sold almost 5,000 copies in paperback and Kindle formats.

The rest is history – in November 2012, “Get the Life you Love” became an Amazon #1 best-seller in its category!

And it all began with a simple intention to have some fun for a good cause.

When you give a little, you get so much back. And every time I now go past Richoux cafe in St Johns Wood, I look back on that fateful day in March 2003, when I put on my red wig and literally took my life to a new level.

From now onwards, I suggest you too look for ways of giving – you will get so much more back.

To mark 10 years since it all began for me, this week I have just published “Get a Life” as Kindle book – (Amazon UK / Amazon USA) 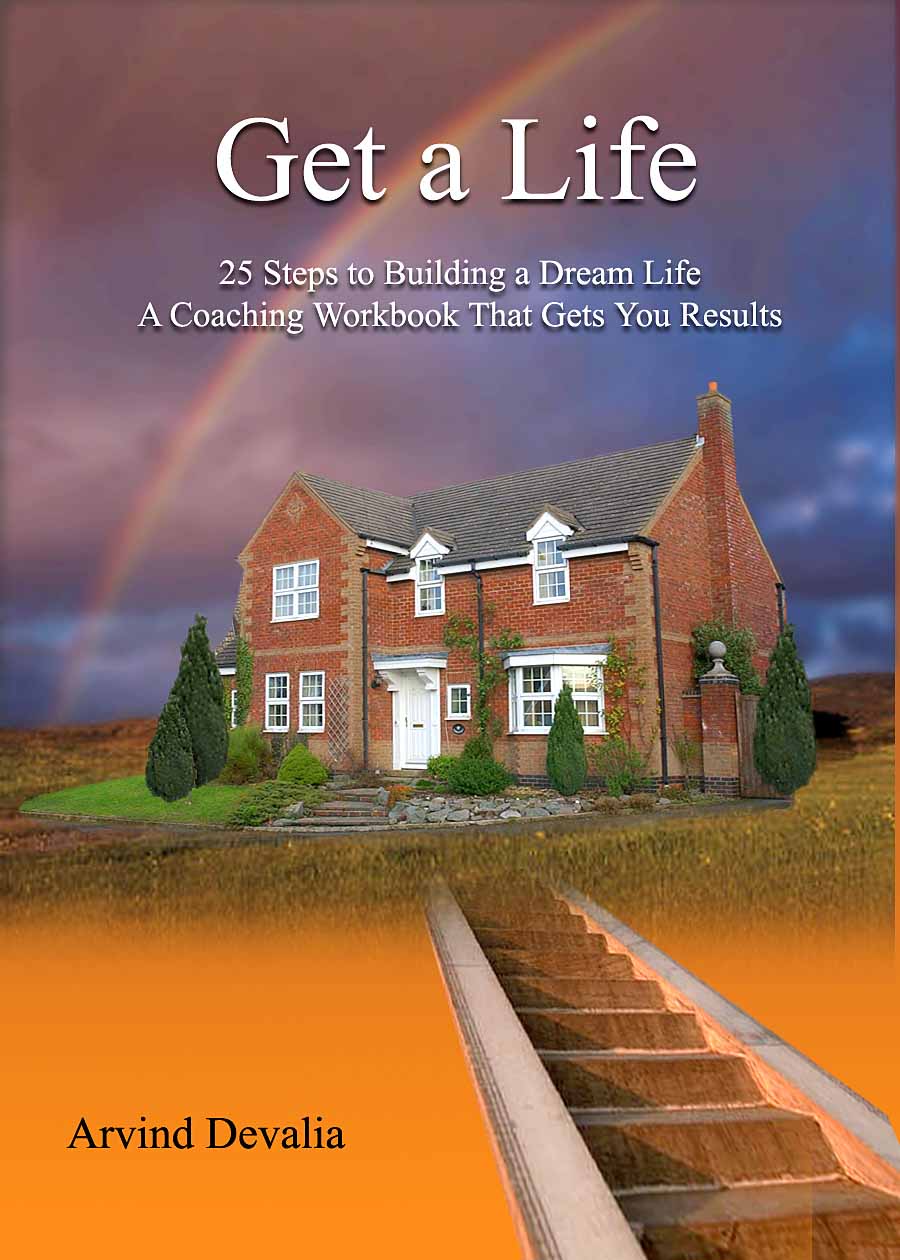 “Get a Life” is a punchy and streamlined version of my second book “Get the Life you Love” – just right for you if you want to get straight down to taking some life changing actions.

And I the story doesn’t even end there yet! Who knows what’s next for me and the books? More of that in a future blog post.

For now, over to you.

What outrageous fun will you engage in from now onwards?

Of course, the definition of “outrageous” will vary from person to person. Some of you may even think that wearing a red wig in public is quite tame. So find YOUR outrageous thing and commit to doing it!

At the end of the day, you have to be yourself – and that’s what people will get. Ask yourself:-

How can I do these things with more of a sense of fun?

Here are some simple points to help you plan your own life-changing outrageous acts of contribution:-

3. Look for a really fun thing!

4. How can you help the greatest number of people?

Now go and make it happen!

And then one day, if I see you on a train or bus, you will certainly stand out from the serious faces!

Incidentally, that red wig from the Red Nose Day in March 2003 has become quite famous and taken on a life of its own!

Here it is in its full glory in Dec 2012 at Basket Brigade. 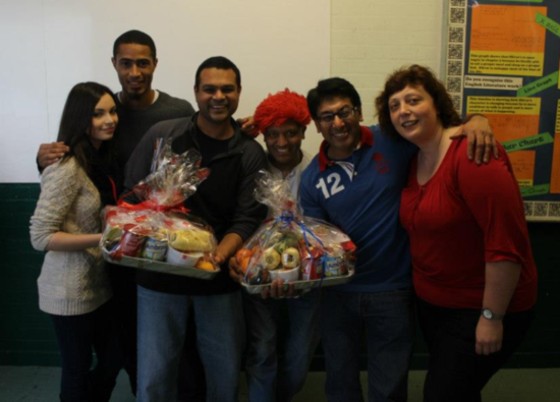 I wish you all an amazing life of success, service and smiles!