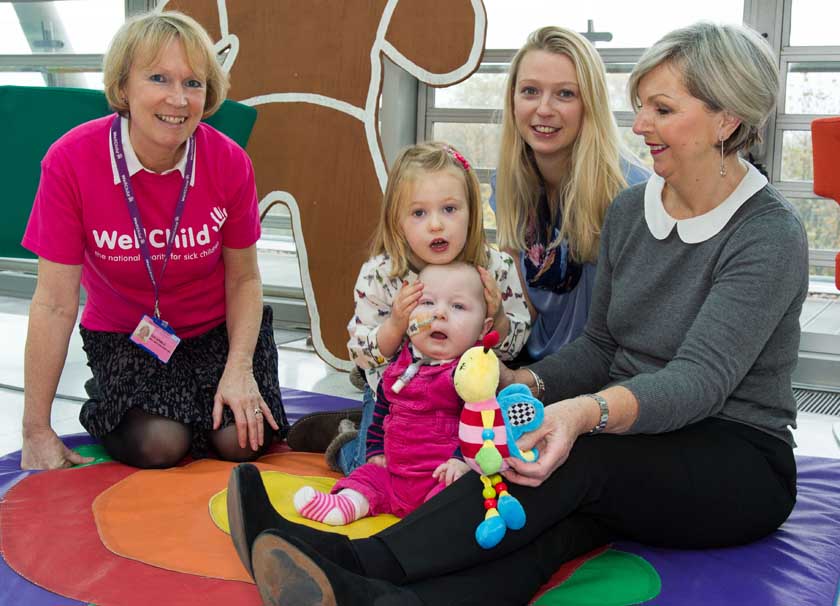 Have you had ever had a life-changing experience around children?

An experience which changed you and your life for ever?

Today I am going to share a key experience from my life – and also the incredible and moving story of baby India. You will then understand and appreciate exactly why I am taking part in the London Marathon this coming Sunday.

I have had 2 life-changing experiences around children – one of them was when I experienced unconditional love for the first time in South India whilst visiting Nirvana School.

A few years before this, I went through an experience which affected me deeply – and it was only recently that I had a sense of completion.

We are talking about a time over 20 years ago. My eldest brother’s wife was expecting twins and there was much excitement in the family – my parents especially looked forward to their first grandchildren.

One evening I got the call that the twins, both baby boys, had arrived prematurely and I rushed off in total excitement to see my newly born nephews. But it was only at the hospital that I found out how just premature they were – and how seriously ill. They had been put into intensive care straight away.

Even worse news was being told that one of the babies was really weak, under-developed and unlikely to survive for more than a few days. But the prognosis was very promising for his twin brother.

As you can imagine, we were all in shock – the good news followed by such devastating news.  I still remember to this day how what sustained and encouraged us was the incredible kindness and support from all the hospital staff. Such tender kindness was so welcome during those torrid days.

Four days after the birth of the twins, the doctors told us that they were losing the battle to save the weaker twin and it was only a matter of a couple of hours.

So they gave us the space to be alone so we could say some final prayers and be with the baby.

There we were, the entire family in a private room and we were handed a tiny bundle. We then said some prayers around my little nephew, smaller than a 2 lb bag of sugar- and even lighter.

Having seen the little guy previously just through his incubator, it felt so good to actually hold him – incredibly tender and fragile looking and yet so much personality and presence already after his first 4 days of life.

It was an incredibly poignant and sad moment in my life to feel this little guy, his heart pumping away and his tiny nostrils fighting to take in some last gasps of oxygen.

I can’t even being to imagine what his mother and father were going through. As for my own parents, they were trying to keep a strong facade but I could tell just how hard it was for them too.

And then it happened – the baby was in my arms and I could feel the heart beating ever so slightly – and then no more. A life had been extinguished even before it had much of a chance.

That life-changing moment stayed with me forever.  Feelings of helplessness, sadness, anger all came up – only to be suppressed forever. Or for many years anyway, until I visited Nirvana School, where I learnt once again the joy of being around children.

And the other tiny twin nephew? He stayed in hospital for another 4 weeks and slowly but surely put on some weight. From being just 3 lb of weight at birth, he is now a gangling young man and is following a promising career in IT and Banking – and of course we are all very fond and proud of him.

The hospital held a small service for my nephew – and after that, as a family, we got on with our lives. We were not even sure if and where he had been buried. Through our grief, we didn’t even follow up – and looking back, maybe we were simply in denial.

Over the years I wondered where he had been buried and I thought of investigating but just found it too painful to even think about it.

Roll on many years – and over the last two years, I felt it was finally time for some closure and I contacted the relevant hospital and cemeteries but didn’t get anywhere.

Then a miracle happened – going through my late father’s files last Xmas, I found a little postcard meticulously filed away – and on it was the Birmingham cemetery address, section and plot number 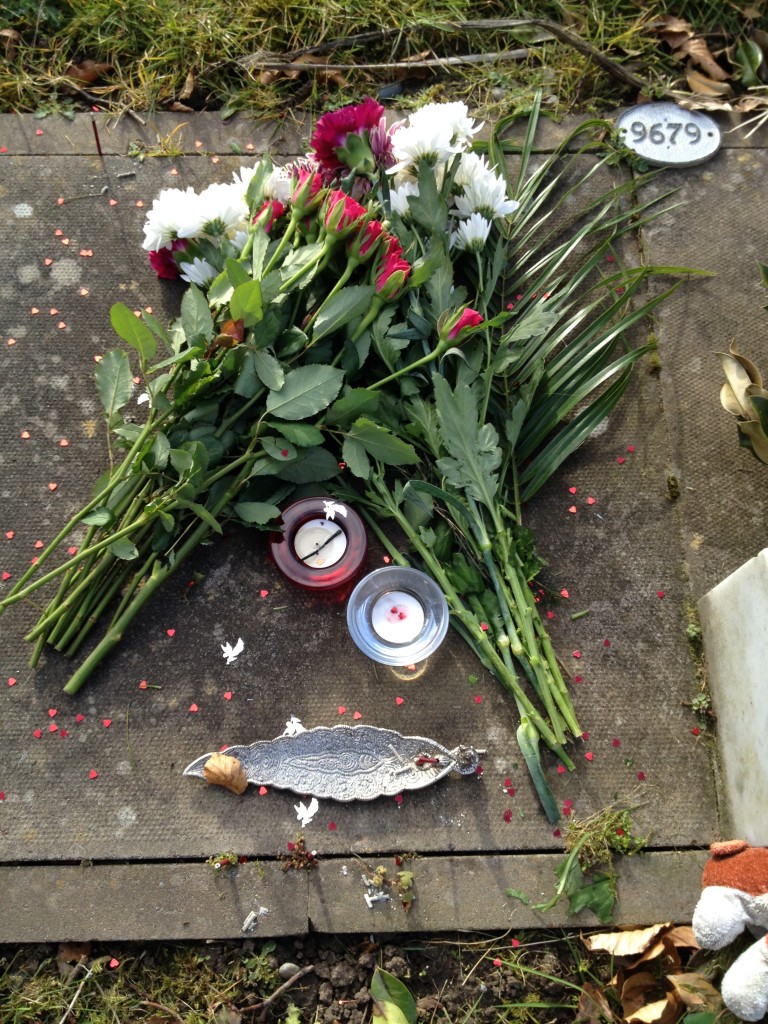 Two weeks ago, on a glorious spring day, we finally visited my late nephew’s tiny grave – it was a poignant moment in our lives, and especially for his twin brother.

It felt like closure in a way, and yet a reminder of someone who is very much part of our lives. His soul lives on amongst us.

Two decades later my memory of the baby passing away in my arms is still as intense as ever – but now there is only a tinge of sadness over our loss and about what could have been.

I am now wiser and braver – and can truly see how death is just as much part of life. I am now also  strong enough to deal with grief and know that as I go along on my life journey, I am sure to experience such loss many more times.

Why the London Marathon?

So moving forward to today, here I am once more on the verge of taking part in the London Marathon.

This will be the third time I am taking part and once again I am raising funds for WellChild, a charity that helps look after sick children just like my nephew and gives support to their families.

Please check out 2 articles I wrote after my previous marathons:-

2. How to Change the World in Less than 8 Hours and 27 Miles

This coming Sunday, 13th April 2014, I’ll be lining up for my third London Marathon with over 36,000 other runners and each one of us will be raising awareness and sponsorship for their chosen cause – I have chosen Well-Child.

Some friends have been asking me why I am so passionate about WellChild and indeed why I am taking part in the London Marathon for them once again.

So having now shared about my late nephew, they all know – I simply want other families and children to receive the same tender kindness and support we received all those years ago. And that’s exactly what WellChild provides.

This is my way of contributing, making a difference to children and giving something back. And you too can do your bit by sponsoring me.

Please click here to go to my sponsorship page

To give you an example of how your sponsorship will help, I am sharing a story about Baby India. Your contribution will be helping baby India and other brave children like her.

(I have been given permission by baby India’s family and WellChild to share her moving story).

After a fairly uneventful pregnancy, India Stern was delivered early by Caesarean Section. As a second-time mum, Suzy, was initially relaxed when India, just like her older sister Freya (3), was slow to feed in the first few days. However she then began to notice signs that India’s breathing might not be normal and sought medical advice.

Within days, when things continued to worsen, India was rushed to hospital. So began a nightmare time for her family as India’s condition deteriorated further and her breathing continued to be problematic even after the trauma of major corrective heart surgery. Eventually doctors established that India has a chromosomal disorder which affects her development and breathing and that a tracheostomy (a surgical opening in the neck to allow oxygen directly into the windpipe) was needed.

Fortunately for India’s family, Sue Donald had just started the pilot phase of her appointment as a WellChild Complex Care Discharge Coordinator and was soon introduced to them. Suzy was heartbroken, grieving for the baby she had thought she would have and wracked with worries about how the family would cope with the complicated regime that India would need at home.

Immediately the move home seemed nearer and less daunting as Sue introduced her first to other families whose children had tracheostomies and then to the vast team of healthcare professionals who would help look after India once she was home, with Sue always taking the lead on the momentous tasking of coordinating everyone.

Suzy said: “I remember feeling very overwhelmed and wondering how did I get here? As I sobbed on Sue’s shoulder she was incredibly supportive, listening to me and not giving me false comfort but practical advice.”
Over the next few weeks Sue rushed around making preparations for India to be discharged from hospital at last, keeping in touch with Suzy at every stage. Despite another recent stay in hospital, things are now going well for India who has been home for a couple of months where she is thriving.

Suzy said: “India is now the smiliest girl in town and her smile was worth waiting for. It’s hard work but we’ve had lots of contact with Sue since we’ve been home which is a tremendous comfort.”

So there you are – my participation in the London Marathon and your sponsorship will help provide more nursing support for children like India.

My target is to raise at least £1,500 for WellChild. Please help me get there.

If just 50 readers sponsor me for at least £20 each, I’ll reach my target easily.

Thanks everyone for your generosity and kindness.