The Power of Giving – and Why I Always Carry a Banana

How friendly are you to strangers? Do you reach out to new people you meet or do you hold back?

Over the years I have learnt to take each person at face value and try not to judge them in any way. Friends often comment on how easily I connect with people and how effortlessly I seem to make friends wherever I go. Maybe it’s a gift, maybe it’s just my way of being – but whatever it is, the results are often magical.

Talking to strangers I meet has led to some great friendships as well as many life lessons.

I have had 2 such experiences with homeless people in London which left me moved to tears on both occasions and reminded me once again of the power of giving and receiving.

In London where I live, there are more and more homeless people, many of whom have to resort to begging, whilst others sell the “Big Issue” magazine which helps the homeless create an income and ultimately aims to get them off the street.

I met one such Big Issue seller outside my local train station – he proudly told me that his full name was Christopher Patrick McCormack. We struck up a friendship and we had a repartee going – every time I saw him I called him by his full name – and he would call me by my full name.

I usually carry some bananas with me whilst I am out and about in London, especially for homeless people, and every time I saw Christopher, I would offer him a banana.

A few weeks after meeting Christopher, I also gifted him a copy of my Amazon best-selling book “Get the Life you Love” – and invited him to read it. My intention was that it would somehow help him in whatever way possible to get a different perspective on life and get off the streets and into some employment. But to be honest, a part of me even wondered if he would read it.

Also, the irony of giving a homeless person such a book was not lost on me.

A few months went by – and one evening as I came out of the train station, Christopher excitedly approached me saying that he had something for me.

He then proudly offered me a carton of fruit – and said how glad he was to see me and how he had kept this gift especially for me.  I resisted and said I couldn’t take it – it was meant for him!

He then turned around and said:-

“Arvind, YOU need to learn to receive! Come on man, you even wrote about that in your book!”

I was blown away as clearly Christopher had read my book, in which I have a chapter about giving and receiving, and how it was important that we all learnt to receive as well as giving.

So of course I happily accepted Christopher’s gift – and to this day, this has been a reminder for me to be open to receiving – and to never ever underestimate the generosity of people’s hearts, no matter what their own personal circumstances might be.

Update – Christopher was featured on 17/10/16 in a double spread article in The Independent Newspaper about The Big Issue magazine celebrating 25 years of publication.

(Further update from July 2017: Sadly my dear friend Christopher Patrick McCormack passed away in July 2017, having just been through a rehab program and becoming the healthiest he had been in years. I attended his funeral along with over 100 friends and family members who gave him a wonderful sendoff).

Around the same time, another homeless person blew me away with his humanity and contribution.

One cold dark evening, I walked past a figure huddled up on the side of the pathway outside Euston station. He had a bulky rucksack by his side and looked quite down and out.

I smiled and said I had some bananas if he would like one.

He smiled back as I put my own rucksack down by his side to get him a banana.

As I was doing so, he said “Do you have any water?”

Now at this point, all sorts of thoughts went through my head. Something along the lines of give some people a finger and they take the whole hand! Part of me even resented this apparent cheekiness in asking for water.

I apologised and said I only had the bottle which I had been drinking from and it was almost empty anyway so I couldn’t give him any water.

At this point, he started rummaging through his own rucksack and eventually pulled out a big unopened, bottle of water.

He handed it to me and said “There you are – you have some water now. I think that’s a fair exchange, don’t you – water for a banana?

On one of the few occasions in my life, I was left speechless.

I was left teary eyed – and in that moment I learnt again about the generosity about the human heart – and our infinite capacity to show love and kindness to others, no matter what’s going on for us.

My invitation to you all is to always be on the look out to contribute to others – that’s what gives your life meaning. At the same time, be open to the many wonderful surprises coming back your way.

Want to change the world? Then please carry out a random act of kindness today and every day from now onwards…

Then choose another one for tomorrow – and continue to carry out a random act of kindness every day for the rest of your life. 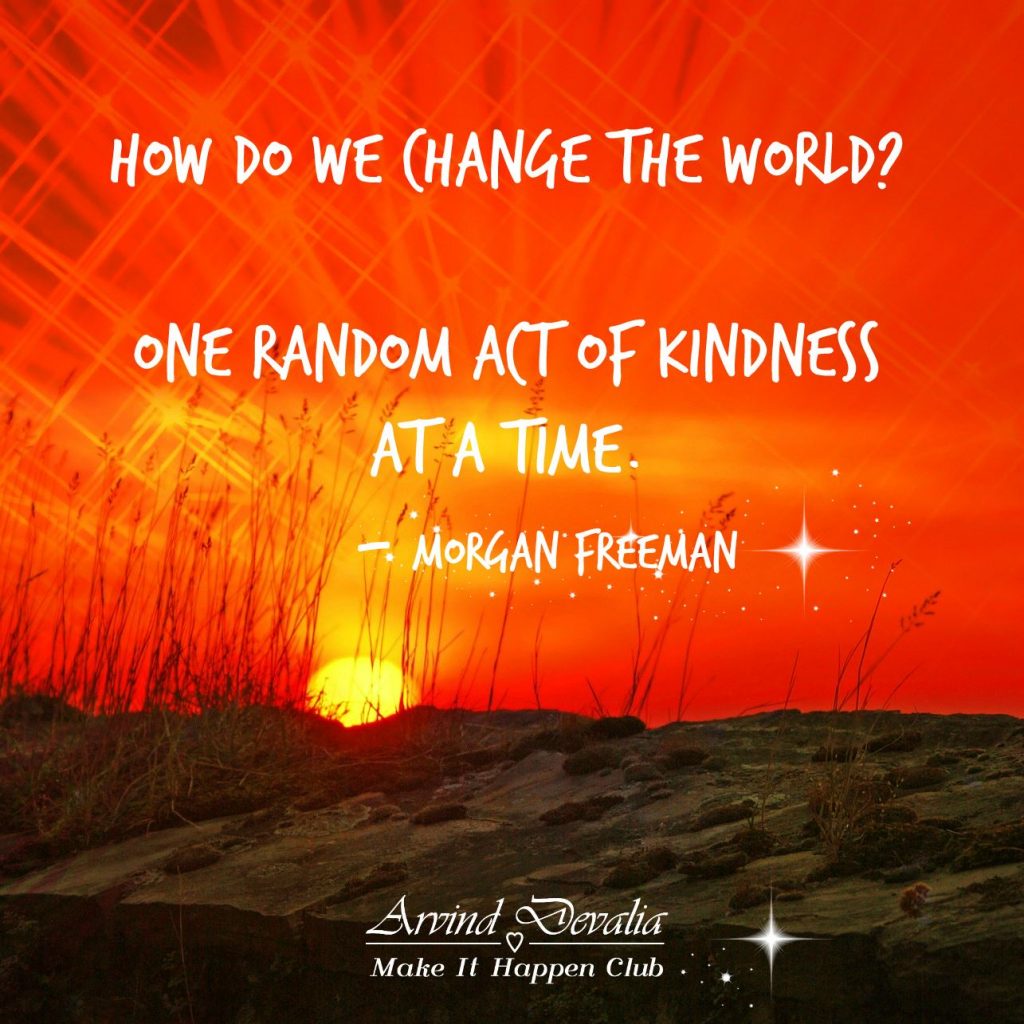