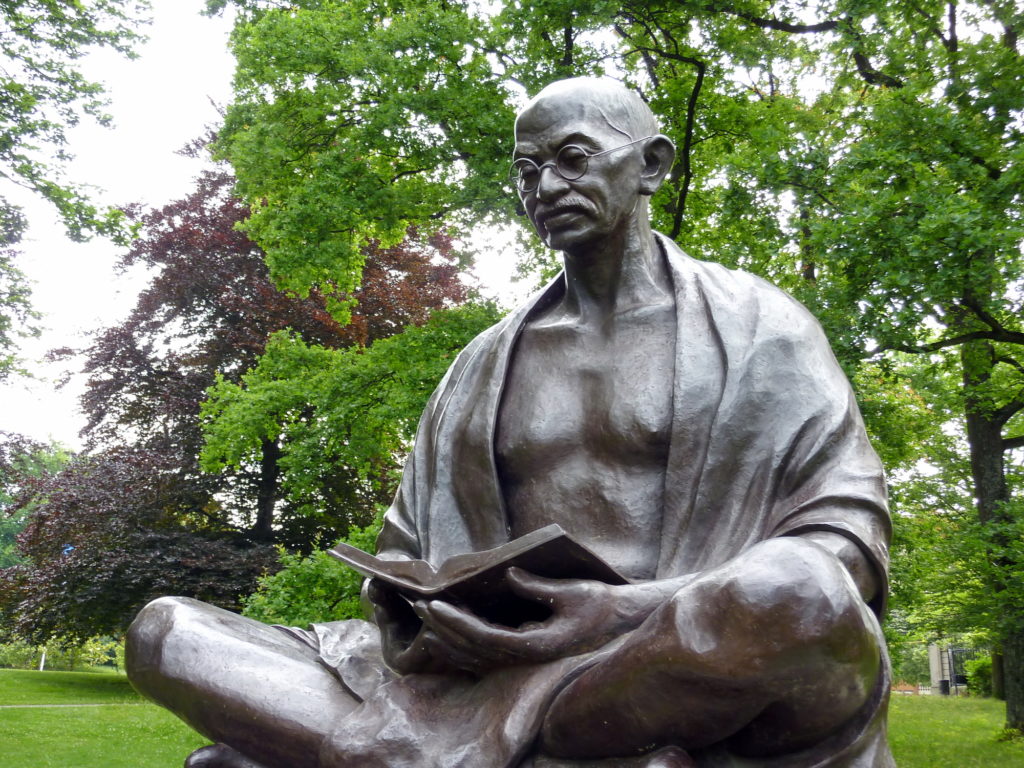 Today, 2nd October 2019, is the 150th anniversary of the birth of Mahatma Gandhi.

So he would have been 150 years old today had he not been assassinated in 1948.

Gandhi may not be around anymore but his legacy and his message of non-violence lives on and he is indeed the light the world needs today.

He has always been one of my heroes from a young age and I remember crying after watching Richard Attenborough’s famous film Gandhi.

We had made a special trip to London and watched the film in Leicester Square just a few days after its release – watching it was a defining moment in my life.

“Generations to come will scarcely believe that such a one as this walked the earth in flesh and blood.” – Einstein

I have read a lot about Gandhi since then and also been influenced by my late father who collected a huge library of Gandhi’s teachings.

It is now up to all of us to apply Gandhi’s teachings in our daily life – after all his message about peace and non-violence is more pertinent than ever before today.

On this 140th anniversary of his birth, here are 6 keys lessons for all of us to apply in our life from today

1. Be the Change You Wish to See in the World.

This is possibly Gandhi’s most famous phrase and tells us that before we can go and change the world, we have to change ourselves.

From the being, comes the doing and ultimately the having.

So we now have the message – “Do the change you wish to see in the world”.

You must be the change you wish to see in the world before it’s too late.

Check out this truly inspirational video clip about being the change:-

Focus on changing yourself and being the change you wish – and soon we can begin to look at the bigger picture and solve the world’s challenges.

There is this anecdotal story about how a mother came with her son to see Gandhi. She wanted Gandhi to tell her son to stop eating too much sugar as it was harmful for his health. He asked her to come back a month later by which time he himself had cut down on his own sugar intake.

The point is that before you can get anyone to take on your own teachings, you have to apply them to your own life. There are various phrases to reflect this message such as “practise what you preach” and “walk the talk”.

“Let your life be your message” – Gandhi

Is your life the message you want to give the world?

When will you be the change you want the world to be?

Even in Gandhi’s time there was vast disparity in the world between the rich and the poor. He could see how the world’s resources were being pilloried to satisfy the excessive demands of the West whilst most people in the rest of the world were barely surviving.

Today I would argue that the way we are all living in the West and elsewhere, there is not even enough for everyone’s needs. We must revisit how we live our lives and truly learn to reduce, reuse and recycle – the 3Rs.

The time has come when we cannot just rely on others – each one of us has to do our bit. Increasingly, more and more people and also businesses are waking up to their responsibilities to the environment, the larger community and the global implications of their activities.

Start today and apply the 3Rs in your life.

Gandhi lived a very simple, frugal life. He died with very few possessions and he preached simplicity and minimalism in all areas of life.

He also dressed simply and even persisted with his simple Indian loin cloth when he visited England and met the King. When asked if he was under dressed for a meeting with the King, Gandhi replied that the King had enough clothes on for both of them!

Minimalism is something I am beginning to apply in my life too. To get you started, please check out this excellent “Minimalist Guide” from my blogging mentor and friend Leo Babauta of Zen Habits.

Leo is a man Gandhi would have approved off for his humility, sharing, compassion and also his hairstyle:-)

Start living a simpler minimalistic life from today – and you will release a lot of time and energy to bring more of Gandhi’s teachings into the world.

4. If No One Walks With You, Walk Alone 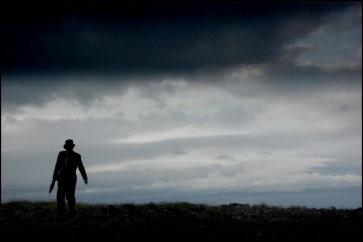 Believe in your cause, follow your truth and stick to your journey even if you have to walk the path on your own.

Gandhi at the end of his life was said to be heart broken with the partition of India as millions were killed and displaced. Even then, he still had a message for the world – it takes just one man to make a difference.

If no one responds to your call, go forward alone.
If no one talks to you, oh luckless one,
If everyone turns away from you in fear,
Reveal your thoughts and express your ideas to yourself.
If everyone leaves you while you are travelling a dangerous road,
If no one wants to look after you,
Walk on alone, on the road strewn with thorns, trampling on them with bleeding feet.
If no one shows a light, if in the dark stormy night everyone shuts their doors,
Use your rib as a torch, lit from the fire of thunder. – Rabindranath Tagore

So anything and everything you do counts and will make a difference.

5. Get Your Power Through Humility 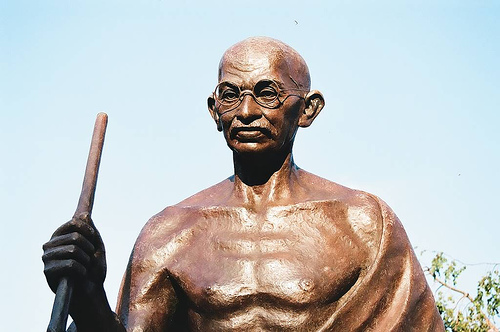 Gandhi was a very humble, down to earth, ordinary human-being but therein lay his power and authority. His power came from being very clear about who he was, his values and his mission.

So the clearer you are about who you are and what you stand for, the more power you will exert in the world, whilst remaining humble and as down to earth as you wish.

Of course, by power what I mean here is not the power that corrupts but one that changes the world and makes a positive contribution.

“The difference between what we do, and what we are capable of doing, would solve most of the world’s problems” – Gandhi

Believe that what you do matters, and that it will make a difference.

You can’t save the whole world single-handedly, and we can’t all be a Gandhi or a Mandela, but you can certainly make a difference to one person at a time. So look for ways to contribute.

Ask yourself what special skill or knowledge you have that can solve a problem or make the best of a situation and that will help or support others.

And actually, maybe we can all be a Gandhi or a Mandela🙂

Start small – and get started no matter what. They too started small one day at the beginning of their own life journeys.

So fear not – you already have and know enough – new skills will come for sure as you progress on your journey. And whatever you choose to do, it will make a difference.

The point is that everything we do matters and makes either a positive or a negative impact on everything around us.

You can start today to apply Gandhi’s message in your life, simply by focussing on this one question:-

How can I bring more love and peace into my life today?

After all, we all have a “Gandhi” inside of us, just waiting to emerge.

As for me, I too shall continue to work on letting my own Gandhi emerge, but perhaps not his dress sense!

The Way Forward – Become Crazy to Change the World!

What makes one person a Gandhi or a Dr Martin Luther King? Is it pure coincidence or do such inspirational historic figures have some special powers?

“Here’s to the crazy ones. The misfits. The rebels. The troublemakers. The round pegs in the square holes. The ones who see things differently. They’re not fond of rules, and they have no respect for the status quo. You can quote them, disagree with them, glorify and vilify them. About the only thing you can’t do is ignore them because they change things. They push the human race forward. And while some may see them as crazy, we see genius. Because the people who are crazy enough to think they can change the world, are the ones who do.” – Steve Jobs, Apple

So just how crazy are you?

And how will YOU change the world?

To get you started right away, please check out this related post:-

Feel the Fear and Change the World Anyway!