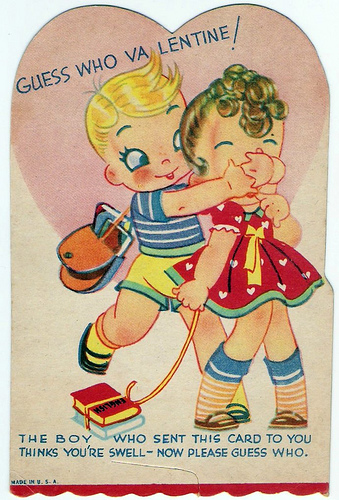 Valentine’s Day is a celebration of love, an opportunity for us to truly reconnect with the real meaning of this day. It is about LOVE, sharing and giving.

Rather than just focussing on what fancy gift we can give to our loved one, or how elaborately we can celebrate the day, let us focus on what we can actually give of ourselves. Even if we are single, it is time to give of ourselves to others.

It’s really not about us anymore – it is about others and what we can do for others.

To make my point, I want to share with you a beautiful and poignant story which I first came across in a book by Wayne Dwyer – The Power of Intention (Amazon UK

The story is “The Valentine” by Ruth McDonald:-

He was a shy little boy, not very popular with the other children in Grade One. As Valentine’s Day approached, his mother was delighted when he asked her one evening to sit down and write the names of all the children in his class so that he could make a Valentines for each.

Slowly he remembered each name aloud, and his mother recorded them on a piece of paper. He worried endlessly for fear he would forget someone.

Armed with a book of Valentines to cut out, with scissors and crayons and paste, he plodded his conscientious way down the list. When each one was finished, his mother printed the name on a piece of paper and watched him laboriously copy it. As the pile of finished Valentines grew, so did his satisfaction.

About this time, his mother began to worry whether the other children would make Valentines for him. He hurried home so fast each afternoon to get on with his task, that it seemed likely the other children playing along the street would forget his existence altogether.

How absolutely horrible if he went off to the party armed with 37 tokens of love- and no one had remembered him!

She wondered if there was some way she could sneak a Valentine among those he was making so that he would be sure of receiving at least a few. But he watched his hoard so jealously, and counted them over so lovingly, that there was no chance to slip in an extra. She assumed a mother’s most normal role, that of patient waiting.

The day of the Valentines box had finally arrived, and she watched him trudge off down the snowy street, a box of heart-shaped cookies in one hand, a shopping bag clutched in the other with 37 neat tokens of his labour. She watched him with a burning heart. “Please God”, she prayed, “Let him get at least a few!”

All afternoon her hands were busy here and there, but her heart was at the school. At half-past three she took her knitting and sat with studied coincidence in a chair that gave a full view of the street.

Finally, he appeared, alone. Her heart sank. Up to the street he came, turning every once in a while to back up a few steps into the wind. She strained her eyes to see his face. At that distance it was just a rosy blur.

It was not until he turned in at the walk that she saw it—the one lone Valentine clutched in his little red mitt. Only one. After all his work. And from the teacher probably. The knitting blurred before her eyes.

If only you could stand between your child and life! She laid down her work and walked to meet him at the door.

“What rosy cheeks! She said. “Here, let me untie your scarf. “Were the cookies good?”

He turned toward her a face shining with happiness and complete fulfilment. “Do you know what? He said. “I didn’t forget one. Not a single one!”

So on this Valentine’s Day, what self-less giving will YOU do?

Every Retweet and Facebook share helps me grow my blog. I look forward to seeing you here again soon. Thank you for reading! – Arvind 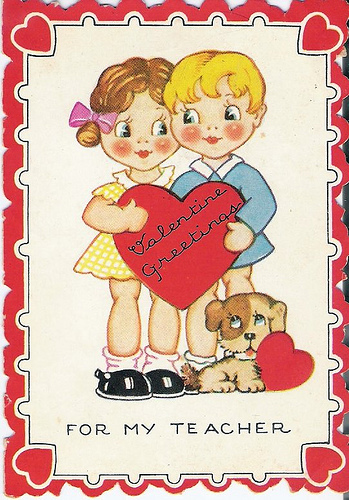