Comedy Show Marriage Proposal – Love is all that Matters! 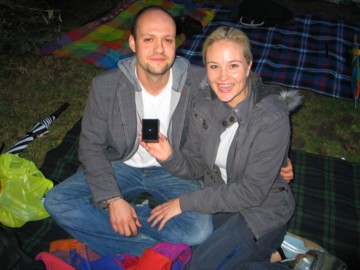 On Sunday evening I went to the Open Air Theatre in Regents Park to watch their annual comedy show. This event featured players from the famed Comedy Store.

I have managed to watch this show every year for the last few years and is a highlight of my social calendar.

But this year was even more special, as just before the interval, the MC announced a very special request. Alex had requested permission to propose to his girlfriend, Mel, during the show and it had all been pre-arranged to happen just after the first half of the show.

So Alex, with all the courage and charm in the world decided to pop the magic question in front of over 1,200 people.

It just so happened that I was sitting on the grass near Alex and Mel, and as I always carry my camera with me, I was at the right place at the right time. The video clip below shows what happens next.

Alex said that he truly, madly, deeply loved Mel and would she marry him?

One just had to be there to see the look on her face, and also the happiness reflected on over 1,200 beaming faces. Never can a couple have had so much goodwill and good luck bestowed on them by so many strangers.

Here’s wishing Alex and Mel all the best for their future.

Indeed, Alex’s wonderful proposal was a magical interlude in a magical and fun evening. After all, love is all that matters.

So how can you bring more magic and love into YOUR own life?