Why You Should Always Stop to Listen to Music 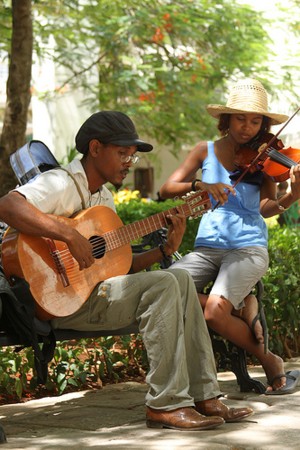 Do you ever stop to listen to live music or are you too absorbed in your own life?

What music and beauty lies within you and around you that you are yet to discover?

One of the things I love about where I live in London is that there is always so much going on in the summertime.

Last Sunday I spent most of the day at the annual Spanish festival which takes place on one of London’s busiest streets, Regents Street.

Then I went off to a Green Festival which showcased the latest ideas on being green – most of the ideas were novel and practical, but some were a bit whacky.

It was quite a full day with a crescendo of live music and other entertainment. But the best part of the day for me was actually on the way to the Spanish festival whilst I was still inside the London Underground train station.

At the bottom of the escalator, was a busker who was playing classic rock and pop tunes and when I got off the train, he was playing Penny Lane by the Beatles.

I am not a performing musician myself (as yet) but I can appreciate someone doing something well when I hear it – and this guy sounded pretty good to my uncultured ears.

What was even more pleasant to watch was how this guy was really enjoying himself. He seemed oblivious to the many train passengers who were simply hurrying past him in a frenzy of activity

“Music expresses that which cannot be said and on which it is impossible to be silent”. – Victor Hugo

Most of these passengers were clearly anxious to get somewhere fast and be anywhere but there, listening to some seemingly down and out guy bumping out old tunes.

I stood for a few moments and listened to the whole song before smiling at him and depositing a few coins on his guitar case. In return I got an appreciative nod and a smile.

What did strike me was how almost everyone else seemed oblivious to him. And yet for all they knew, this guy could have been the greatest guitarist in the world.

This reminded me of the famous story of master violinist Joshua Bell who once played his priceless violin at a train station in Washington DC.

This story has gone around for a while and some have even questioned its validity. However, it is an absolutely true story and you can read the shortened version here on Snopes.

If you prefer, you can read the detailed and award winning account from the Washington Post entitled “Pearls Before Breakfast”.

“What is this life if, full of care,
We have no time to stand and stare” – W.H. Davies (Welsh poet)

Exactly – what is life if we don’t have time to stop, stare and enjoy the music and miracles all around us?

“Without music, life would be a mistake” – Friedrich Nietzsche

So next time you are a in hurry and you hear some music, make a special point to stop and listen – you may just be listening to an impresario.

And if not, at least you will have given yourself a much needed break.

Life is too short – slow down and make time to listen to music.