Muslims Love Their Children Too – Just Like Me and You 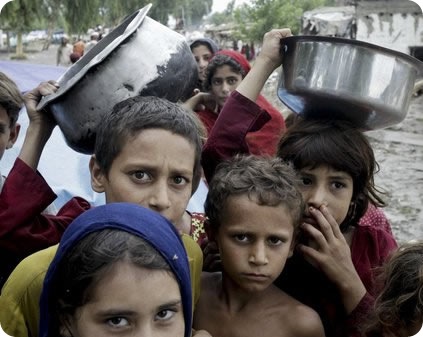 Have you ever had your home and all your worldly possessions swept away by a giant wall of water?

If you are able to read this right now, then probably not. But for a quirk of fate, this is exactly what could have happened to you. And this is just what’s happened to over 20 million people in Pakistan.

We are in the middle of one of the worst human tragedies ever – probably the greatest overnight displacement of human beings in our history.

Unless you have been avoiding all media for the last 2 weeks, you will know that there has been a major natural catastrophe in Pakistan, where millions of people have been affected by the worst flooding in almost a century.

Thousands have died and millions have lost everything they own.

As you see these images, you cannot fail to be moved by the plight of all these millions of people.

Most people are driven to do something to help.

My friend Abubakar Jamil who actually lives in Pakistan says:-

“Never for a single moment think, that you are helping some flood victims, living in a far away land, unknown to you.

Just know that you are helping yourself.

Yet for me what has been surprising and disturbing is the apparently muted response from countries around the world.

Though aid agencies and charities have been pleading for urgent help, the response has not been as generous and rapid as has been in previous natural disasters such as the Tsunami in December 2004.

Now I am wondering why this could be – maybe the economic times but surely not compassion fatigue?

Or could there be a deeper, more sinister reason? Is it because of where this disaster has happened?

I am sure the world wants to help – but the situations needs much more urgency as so many lives and livelihoods are at risk.

This also reminds me of just how much “islamophia” in the world today. It is unbelievable – it’s almost as if some people just need to find a group or someone to blame for all the challenges we face today.

Right now, there is a very heated debate going on in the USA over the sitting of a proposed Islamic community centre and mosque near ground zero.

Even President Obama has had to state his position. As he said, Muslims “have the same right to practice their religion as anyone else in this country”.

Of course, this would not have been a controversy if it was a proposal to build a synagogue or a church.

What’s being forgotten is that the people behind the proposal have as much to do with the 9/11 bombers as you and I. Zilch. Nothing.

This Islamic centre could actually be a perfect way of uniting people and spreading more awareness of just what Islam stands for.

Maybe it just boils down to this – the perception of all Muslims as gun-toting terrorists. And yet the truth is so much further from this.

Like all decent people around the world, all Muslims don’t condone the terrorism as carried out by those few extreme, supposed believers of their faith.

At the same time, we also have such extremists in all ethnic and religious groups.  You just have to remember what’s happened over two decades in the name of ethnic cleansing in places like Serbia, Sudan and Rwanda to name just a few.

There are atrocities happening everywhere, with the perpetrators never brought to justice. Closer to my own ancestral home, India, over eight years after hundreds of Muslims were killed in Gujarat, not one person has yet been brought to justice.

What is your perception of a Muslim? Do you think that all Muslims are gun wielding terrorists?

If so, then I invite you to revisit your viewpoint right now.

My understanding of a Muslim is someone who follows the Islamic faith. Simple, nothing more, nothing less.

And we can also have white, brown, black Muslims – it has nothing to do with one’s skin colour. It’s just what a person’s faith is and what they believe in.

I have many Muslim friends – and unless you knew about their religious beliefs, you would not notice anything different about them – they are just like you and me.

Do you hold stereotype viewpoints of other people too?

So look at yourself and see how you judge and condone people based on their other characteristics.

For example, do you dislike people with red hair? Or can you even trust short people? I may not have red hair (yet) but I am certainly short – can you still trust me?

If you want to learn more about someone’s faith, talk to them and have a discussion. Get to know them and you will find that they are just as ordinary and extraordinary, as you and me.

People who follow the Islamic faith are the same too.

And yes, they too love their children just as much as you do.

So we are the same really.

I would like to leave the final words to my friend Abubakar Jamil:-